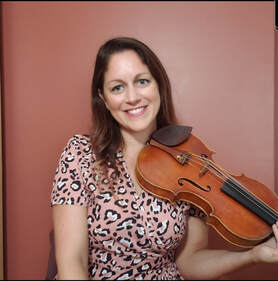 ​Ms. Simmelink started the violin at age four, and has a keen sense of what it takes to start an instrument. She absolutely loves teaching beginners to advanced levels of playing, and has lots of success in watching children blossom throughout their musical journey. These students have gone on to perform with nationwide known youth orchestras such as the Maryland Classics Youth Orchestra, Potomac Valley Youth Orchestra and the Phoenix Youth Orchestra. Her students have enjoyed performances at lovely venues, including the Strathmore Music Center, Gaithersburg Arts Barn, McCathran Hall of Washington Grove and the John Kendall Recital Hall of Potters Violin Shop. Ms. Simmelink has been teaching over the past 15 years and utilizes modern techniques coupled with the Suzuki Method, She is Suzuki trained by Ronda Cole, and continues teaching advancement with Pedagogy Workshops.
​
She performs professionally year round with groups such as the Maryland Symphony Orchestra, Richmond Symphony, Delaware Symphony, Alexandria Symphony, the American Pops Orchestra, Amadeus Chamber Orchestra, Savannah Philharmonic and the National Philharmonic.  An avid lover of chamber music, she has performed at the Dumbarton Oaks House Chamber Series, was featured through the Washington Performing Arts (WPA) 6th and I Synagogue concert series with renowned mandolinist, Avi Avital, performed Souvenir de Florence with the Charm City Chamber Players and has been highlighted by the Savannah Philharmonic Chamber Concert Series.

As a member of the Savannah Philharmonic, Ms. Simmelink enjoys her travels experiencing the beautiful sunny, southern charm of the Savannah squares. Having performed in historic venues such as the Lucas Theater, Cathedral of St. John the Baptist and the Johnny Mercer Theater of Savannah, Georgia. Her most recent travels with the Hollywood Touring Orchestra, have taken her to China concert halls, including the People’s Hall of China. Ms. Simmelink has also performed in other world renowned concert venues including the prestigious Carnegie Hall, Lincoln Center, The Kennedy Center and the Vienna Konzerthaus.

Ms. Simmelink holds a Bachelor’s degree in violin performance from Ithaca College and a Masters of Music from Arizona State University. Her primary teachers have been Mr. Jody Gatwood, Dr. Rebecca Ansel, Ms. Susan Waterbury and Dr. Katherine E. McLin. While in Arizona, she performed regularly with The Phoenix Symphony, Symphony of the Southwest, and was Concertmaster of the Arizona State University Chamber and Symphony Orchestras. She is also a former member of The Urban Strings, a progressive electric string quartet, who performed in various night clubs, festivals and concert halls performing a wide range of music from hard rock to alternative, pop, jazz and film scores.
​
​Ms. Simmelink plays on a modern violin by Jonathan Cooper of Portland, Maine, and a fine gold-mounted bow by John Norwood Lee.